Module 9 discusses how to handle animals and the treatment of wildlife while under the direct control of a person, trap, or other control method.

Wildlife that is captured can become extremely stressed when approached and handled by people. Proper animal handling begins before the animal is captured.

Use quality equipment and ensure that it is in proper working order. Initial equipment includes durable heavy leather gloves, such as welding gloves, and a blanket made of smooth but durable fabric, such as denim.

Recall in Module 8 how humane trapping required attention to trap selection, placement, and monitoring. Listed below are additional strategies to consider. 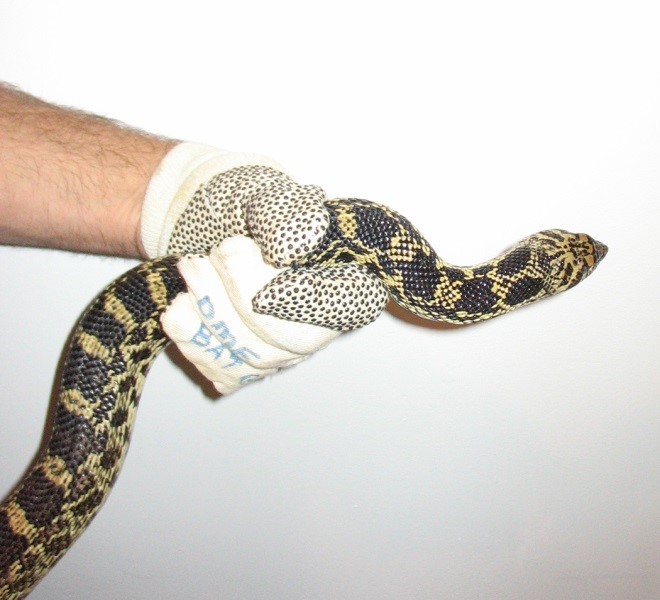 Place the captured snake in a pillow case and tie the end securely, ensuring that the snake is not in the knot. When transporting a snake, place the pillow case in a bucket, cooler, or other hard-sided container with a cover to prevent injury. Always ensure that animals have proper ventilation.

Place captured snakes in a cool, preferably shaded, area between 40° and 75o

Move captured animals out of public view as quickly as possible to reduce stress to the animal and minimize the risk that well-meaning or curious onlookers will be injured. Ensure that the holding area for animals is neither too hot (out of direct sun) nor too cold (out of rain, snow, or wind). In general, small mammals have a low tolerance to extreme heat or cold, while large animals (raccoon-sized and larger) have greater tolerance. Sometimes, moving the traps and animals to a shaded area or out of the elements is sufficient. Always keep cages partially covered to help reduce animal stress.

Depending on state laws, three options are available for disposal of captured animals: on-site release (relocation), translocation, or euthanasia.

Translocation refers to moving and releasing an animal outside of its home range. While legal in some states, many wildlife biologists have serious reservations about its use. Animals moved from their home range suffer higher-than-normal mortality rates, are more likely to repeat problem behaviors, and may transmit diseases to animals in the new area. Also some states (e.g., New York), do not allow landowners to move problem wildlife from their property. A Wildlife Control Operator (WCO) license or a permit may be required for live transport of wildlife.

Translocation is stressful and may be inhumane to released animals. When species such as raccoons and tree squirrels are released into an area where territories are already occupied, resulting disputes can lead to injury and death to both released and resident animals. Species that are more communal and less territorial, such as rabbits, voles, opossums, snakes, and birds, are better candidates for translocation.

State regulations may place restrictions on the release of rabies-vector species (e.g., raccoons, foxes, and skunks). Always check your state regulations before moving any species to another location.

If translocation is the chosen and legal option for disposition, consider the following recommendations.

Sometimes, despite our best intentions, animals refuse to leave their cage or box traps. This behavior is particularly common with skunks and opossums (Figure 2). 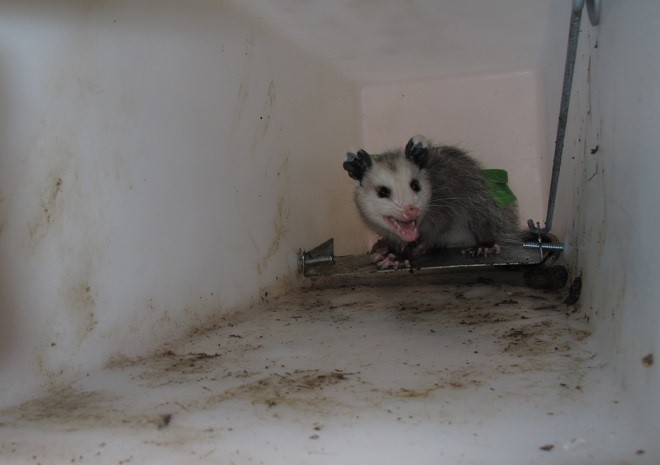 Figure 2. A juvenile opossum hunkers down in the back of a box trap. Photo by Stephen M. Vantassel

Several methods can be used to encourage an animal to leave a trap.

In some states, laws or regulations require euthanasia of captured nuisance animals. If the potential for disease transmission is high, euthanasia is the preferred option. Euthanasia must be performed in accordance with your state regulations. Guidelines for euthanasia have been established by the American Veterinary Medical Association (AVMA) but their application in field settings may be difficult. Recommendations are available at http://icwdm.org. In addition, organizations such as the National Wildlife Control Operators Association and The Wildlife Society are working on guidelines for humane euthanasia in field settings. Module 10 has more information on euthanasia.