Local, state, and federal regulations are designed to protect wildlife and the public. This module covers some of the agencies and laws that address wildlife damage management (WDM). In addition to legal requirements, think about the ethical aspects of WDM.

Be aware of the current status of laws at state national levels of authority. State and local regulations frequently are more restrictive than federal regulations. Different laws and regulations apply to those who manage wildlife damage, apply pesticides, hunt and trap animals, and rehabilitate wildlife.

Four major agencies are involved with regulating the WDM industry at the federal level.

In some circumstances, other federal agencies may have jurisdiction. The US Department of Agriculture, Animal and Plant Health Inspection Service, Division of Wildlife Services (USDA-APHIS-WS) provides federal assistance in addressing wildlife damage issues, but does not have a regulatory role. They help manage wildlife to reduce damage to agriculture and natural resources, minimize risks to human health and safety, and help protect endangered and threatened species. The Federal Aviation Administration supervises the management of wildlife at airports.

The major agencies involved in wildlife-related work at the state level include:

The major agencies involved in wildlife-related work at the local level include:

The following discussions include brief descriptions of pertinent federal laws and regulations that affect WDM. These are part of the US Code of Federal Regulations, and are found on-line and at most public libraries: “16 U.S.C. 1531-1544, 87 Stat. 884.”

The Endangered Species Act (ESA) was passed in 1973 to protect imperiled plant and animal species. The ESA requires that endangered or threatened species must not be injured or harassed by WDM activities. Endangered and threatened species cannot be killed, harmed, or collected except under carefully described circumstances, and only with appropriate federal and state permits.

If endangered or threatened species exist in your area, you must take special precautions. The presence of endangered or threatened species will affect how you can set traps or apply pesticides. One measure of professionalism is the level of effort put forth to protect non-target species, whether or not they are endangered. Endangered species usually are not present in most urban settings, however protected birds often are. Many species of wildlife are protected under state regulations, but are not threatened or endangered. For more information on the ESA, visit http://www.fws.gov/endangered/laws-policies/index.html.

The Migratory Bird Treaty Act (MBTA) protects all migratory birds, as well as their feathers, nests, and eggs. It does not include pigeons, house sparrows, or starlings, as they are not native species. You must have a federal permit to take (kill), possess, or transport migratory birds, nests, or eggs. The law does not require a permit for you to rescue a raptor trapped in a building provided the bird is not harmed, and is released outdoors immediately.

Before you attempt to control a migratory bird (e.g., woodpeckers, raptors, and waterfowl) the landowner must obtain a 50 CFR Depredation Permit from the USFWS (USFWS Bird Depredation Permit) (http://www.fws.gov/forms/3-200-13.pdf). The permit allows the taking of migratory birds that have become a nuisance, are destructive to public or private property, or are a threat to public health or welfare. The permit spells out the conditions under which birds may be controlled and the methods that may be used. Permit holders may control migratory birds that are causing, or are about to cause, serious damage to crops, nursery stocks, or fish in hatcheries. A fee is required for the permit.

State and local ordinances may further define control activities. For example in New York State, the Environmental Conservation Law states, “Red-winged blackbirds, common grackles, and cowbirds destroying any crop may be killed during the months of June, July, August, September and October by the owner of the crop or property on which it is growing or by any person in his employ.” Local laws may limit the types of treatments (e.g., pyrotechnics or firearms) that can be used for managing birds. Check local and state laws before attempting to manage any bird species.

The Federal Insecticide, Fungicide and Rodenticide Act (FIFRA) regulates the availability and use of pesticides, including repellents and toxicants. Only a licensed pesticide applicator can apply pesticides on someone else’s land, or apply restricted use pesticides.

The Occupational Safety and Health Act (OSHA) sets standards to promote worker safety. For example, workers must be informed in advance about potential job hazards such as possible exposure to histoplasmosis from contact with pigeon droppings. The OSHA also oversees the investigation of employee complaints that may be related to the use of pesticides. Even if you do not have more than 10 workers, review OSHA standards and training recommendations, especially those on safe practices in confined spaces and the use of respirators.

Some wildlife species, such as migratory birds, eagles, and marine mammals, are protected by state and federal laws and regulations. Some nuisance species are unprotected, and have no restrictions on their take. Typically, licenses or permits are not required to shoot, fish, or trap these species (e.g., European starlings, Asian carp, Norway rats, or house mice).

In recent years, animal control agencies have attempted to apply humane regulations regarding the treatment of domesticated animals to the treatment of problem wildlife. For example, people have been cited for animal cruelty because cage-trapped animals did not have access to water. Animal protection groups claim that state laws that protect animals against cruelty apply to wildlife as well. We expect this trend to continue until officials and the courts decide the matter. Therefore, it is imperative that your WDM activities be as discrete as possible and use the highest standards. Just because a technique is legal, does not mean it is wise or appropriate. Always consider how a conflict situation might be perceived by others. Keep in mind that with public access to cell phone cameras, any of your activities might be filmed and appear in the media.

In general, a non-target animal is an individual or species that is incidentally captured or taken (Figure 1). If the animal is classified as a species you are allowed to manage, most states allow you to deal with it in accordance to the wishes of the client. If the species is a rabies vector (e.g., raccoon, skunk, or fox), some states require it to be euthanized, or limit transport distances. 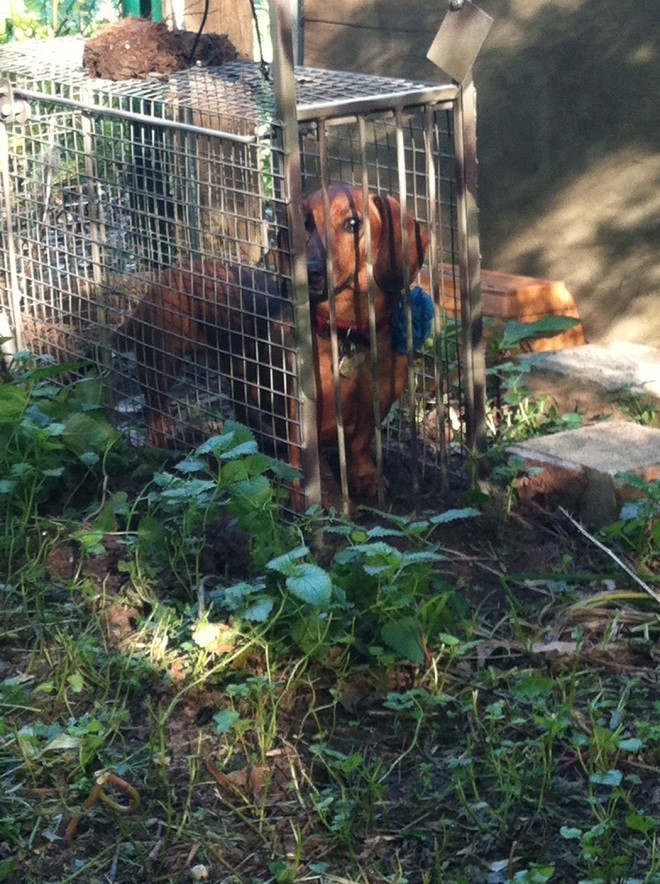 The legal situation becomes more unclear when the non-target is a domestic animal, as these are normally under the jurisdiction of animal control officers (ACOs), as well as considered to be private property. House cats frequently enter cage traps. If the cat is owned, it must be released. However it often is unclear if feral cats are considered wild or domestic. Most states do not clarify the legal status of feral cats, so work with local animal shelters when capturing feral domestic animals. Your local government may require domestic species to be taken to your local animal shelter for final disposition. Always understand the laws and regulations before you act.

Ethics are the principles that guide the way you perform activities. Your behavior flows from your moral value system. In short, every action exhibits ethical standards, but not every action represents commendable standards.

Your effort to manage wildlife damage must follow the highest ethical and humane practices because the public holds wildlife in such high regard. Consider how your actions affect the animal. Many traditions teach that proper ethical behavior requires us to treat others the way we would like to be treated. Respect is the quality of treating people, animals, and things relative to their inherent value and dignity. Be empathetic and respectful of others, and you likely will make correct decisions.

While many decisions are clearly right or wrong, many more depend on the situation. Reasonable people can disagree over a specific course of action, but always consider whether you can defend your decisions. If you will be ashamed of an action, then you should not do it. Always consider how your actions will affect others and the environment. Sometimes no perfect options exist, but you can always choose the options with the fewest negative consequences.