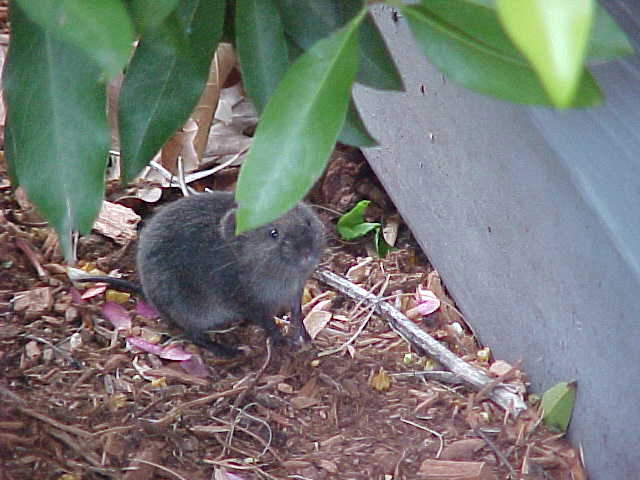 Voles are non-game mammals and can be controlled whenever they are causing damage. Contact your state wildlife agency for details regarding regulations.

Voles (Figure 1), also called meadow mice or field mice, are New World rodents. They are distinct from common woodland mice (Peromyscus spp.) and Old World house mice (Mus musculus). Twenty-three species of voles occupy the US, 4 of which are present in the northeastern US. Voles tend to have small, inconspicuous ears and eyes when compared to mice.

Voles are compact animals with stocky bodies, short legs, and short tails. The eyes are small and the ears are not very visible. Voles usually are brown or gray, although many color variations exist. Tentative identification of an individual can be made using the information provided in this chapter. For positive identification, use a field guide or contact an expert.

Meadow voles (M. pennsylvanicus) have a total length is 5½ to 7½ inches. The fur is gray to yellow-brown and obscured by black-tipped hairs. Northern subspecies may have red in their fur. Underparts are gray, sometimes washed with silver or buff. The tail is bicolored.

Pine voles (M. pinetorum) have a total length of 4 to 6 inches. The brown fur is soft and dense. Underparts are gray, mixed with some yellow to cinnamon. The tail is barely bicolored or uniform in color.

Yellow nose voles (M. montanus) are 6 to 7 inches in total length. The fur on the body is grayish brown and the nose is yellow.

Boreal redback voles (Clethrionomys gapperi) are 4 to 6½ inches in total length. The fur on most is gray, with a reddish back.

Voles pose no major hazard to public health because of their infrequent contact with humans. They may carry diseases such as plague (Yersinia pestis) and tularemia (Francisilla tularensis). Ectoparasites such as mites and ticks feed on voles. Use protective gloves when handling voles.

Voles may breed throughout the year, but most commonly in spring and summer. Voles typically have 1 to 5 litters per year. Litter sizes range from 1 to 11, but the average 3 to 6. The gestation period is about 21 days. Young are weaned by the time they are 21 days old, and mature in about 35 days. Females can breed as soon as they reach maturity. The lifespan of a vole is short, ranging from 2 to 16 months.

Population levels generally peak every 2 to 5 years though the cycles are not predictable. During population irruptions, densities of voles have risen to 4,000 voles per acre! Several hundred voles per acre is common in good habitat, such as orchards or shrubby meadows. Dispersal, food quality, climate, predation, physiological stress, and genetics influence the population levels.

Voles are active day and night, year-round. They do not hibernate. Home ranges usually are ¼ acre or less but vary with season, population density, habitat, food supply, and other factors. Voles construct many tunnels and surface runways with numerous entrances to a burrow. A single burrow system may contain a social group with several adults and young.

Voles occupy a wide variety of habitats. They prefer areas with heavy ground cover of grasses, forbs, and litter. Voles use habitats modified by humans such as orchards, windbreaks, and cultivated fields, especially when vole populations are high. Meadow voles prefer wet meadows and shrub-land habitats in the northeastern US. Pine voles prefer heavy ground cover along forest edges, abandoned fields, and orchards.

Voles eat a variety of plants, most frequently grasses and forbs. In late summer and fall they store seeds, tubers, bulbs, and rhizomes. They primarily eat bark during winter, and will eat crops during spring and summer, especially when densities of voles are high. Occasionally they east snails, insects, and the remains of animals.

Pine voles make a high pitched noise that may serve as a warning signal.

The most easily identifiable sign of meadow voles is an extensive surface runway system (Figure 2) with several openings to burrows. Runways are 1 to 2 inches wide. Vegetation near well-traveled runways may be clipped close to the ground. Feces and small pieces of vegetation are found in runways. Pine voles do not use surface runways. Instead they build an extensive system of underground tunnels. 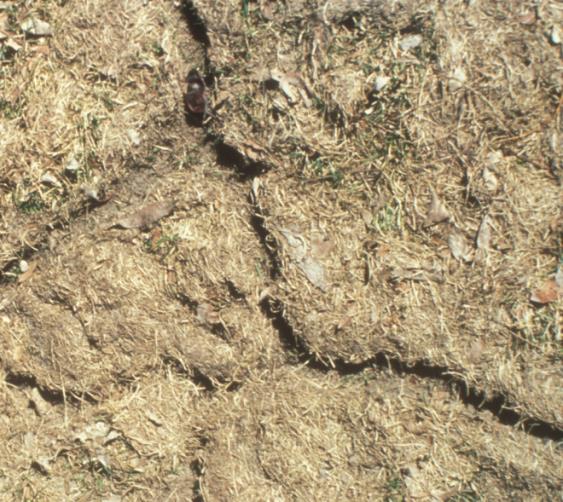 Figure 2. Trails cut into the grass and soil. Photo by the University of Nebraska-Lincoln (UNL).

Voles can damage lawns, golf courses, and ground covers with their tunnels and runways.

Voles can cause extensive damage to orchards, ornamentals, and tree plantings through girdling, usually in late fall and winter (Figure 3). Marks from girdling and gnawing alone are not necessarily indicative of damage by voles because other animals, such as rabbits, may cause similar damage. Marks of voles are about ⅛ inch wide, ⅜ inch long, and ⅟16 inch or more deep. Marks made by gnawing by rabbits are larger and not distinct. Rabbits neatly clip branches at a 45° angle. Examine the damage and accompanying signs (feces, tracks, and burrow systems) to identify the animal causing the damage.  Much of the damage to tree bark occurs under the protection of snow cover. Voles will girdle trees as high as the deepest winter snowfall. 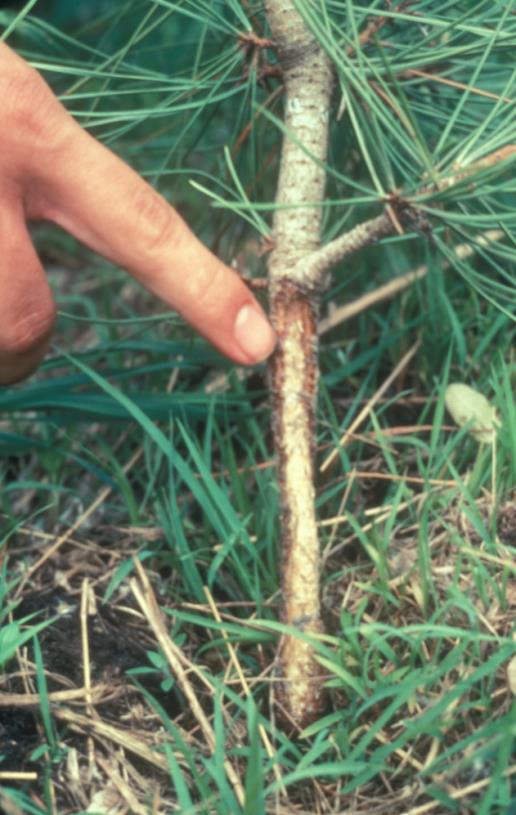 Voles may damage and destroy field crops, such as corn, soybeans, alfalfa, clover, potatoes, and sugar beets. Runways and tunnels of voles interfere with crop irrigation by displacing water and causing soil erosion.

Voles do not pose a direct threat to animals, but may consume and contaminate stored feed.

Voles occasionally invade structures but usually present little threat.  Voles will often enter buildings or greenhouses near suitable habitat during the first snowfall seeking warmth and potential food plants. Damage to stored plants in greenhouses can be substantial and costly.

Often, the control of voles may not appear to be justified in comparison to the damage, but the “ounce of prevention” rule often applies. Preventive measures that are costly up front may be the most economical options in the long-term.

Remove or modify bird feeders to reduce spillage. Eliminate ground cover with either repeated close mowing or herbicides. Cultivate soil to destroy burrows and reduce cover.  Mow grasses and other vegetation to less than 2 inches in height.

Voles are attracted to many types of natural and synthetic mulches, and weed prevention mats. The overhead cover provides excellent protection for their runways and creates ideal breeding conditions. If vole problems occur frequently, remove mulch and expose bare soil. About the only mulches that will not support a vole tunnel system are coarse stone, or large chunks of pine bark. Voles will tunnel underneath shredded pine bark.

Use wire cages to protect trees and ornamental plants.  Trench cages into the ground at least 2 inches, or surround it with coarse stone. Cages must be higher than the deepest anticipated snow depth during winter, or voles will climb over the top and girdle the trees. Plastic tree wraps are less effective because they tend to break down in UV light, and may unfurl in high winds exposing tree bark.

No devices are effective in frightening voles.

Registered repellents for voles include capsaicin, and thiram. Fox and coyote urine are available either as a liquid or powder, although their effectiveness is uncertain. Follow all label and application instructions.

Registered toxicants include zinc phosphide and anticoagulants (e.g., chlorophacinone). Most products are restricted-use, and may only be applied by certified applicators. Follow label directions carefully. Using t-tube bait stations will reduce non-target animal access to toxic baits. Toxic baits should be used as a last resort if exclusion or habitat modification has failed to reduce damage to tolerable levels.

Shooting is not practical or effective for managing voles.

Mouse snap traps, box traps (Sherman-type), and multiple-catch traps are effective for capturing voles. Set traps where activity of voles is observed, such as near runways and burrow openings. Bait them with apple slices, the voles favorite food.

Provide perches in large agricultural areas for raptors that may feed on voles. Although raptors and other predators may take many voles, their impact is usually not enough to reduce vole population growth, especially during a population irruption.

Relocation of voles is not recommended.

Translocation of voles is not recommended.

Voles can be euthanized with carbon dioxide gas or by cervical dislocation.