Most beaver (Castor canadensis) conflicts are associated with dam-building and flooding, or feeding damage and cutting of valuable trees.  Usually beaver conflicts occur near water, where beaver lodges or bank dens are constructed. Flooding may wash out roads, damage septic systems, or kill trees in low-lying areas.

The legal status of beavers varies among states. In some states, beavers are protected except during furbearer seasons. In other seasons, they are classified as pests, and may be taken whenever they cause damage. Beavers generally are not considered pests until economic loss is extensive. Consult your state regulations for additional information related to beaver management.

Beavers (Figure 1) are the largest rodents in North America. They are mainly aquatic, and easily recognized by their large, flat tails.

Beavers can remain submerged underwater for long periods of time, and can close their nose and ears to prevent water entry. Their lips can close behind their four large, incisor teeth allowing them to gnaw underwater without swallowing water. The underfur is dense and generally gray in color. The guard hair is long and coarse, ranging in color from yellow-brown to black, with red-brown as the most common coloration. The flattened tail is scaly, and nearly hairless. It is used as a rudder when swimming, a warning signal when slapped on the water, and a prop when sitting upright. Beavers have large, bright orange, front incisor teeth that grow continuously throughout their lives. The incisors are beveled, and sharpened through gnawing and chewing.

The only way to externally distinguish the sex of a beaver, unless it is a lactating female, is to feel for the presence of a baculum (a penis bone). Adult beavers typically weigh 35 to 50 pounds, with some reaching 70 to 85 pounds, and a few over 100 pounds.

Beavers are found throughout most of North America, and are abundant in the northeast.

In urban areas, beavers may become habituated to humans and may be aggressive if approached. Beavers infected with rabies, which is very uncommon, may attack people. Beavers are hosts to several ectoparasites and internal parasites, including nematodes, trematodes, and coccidia. Beavers contaminate water with Giardia lamblia, a pathogenic intestinal parasite that causes intestinal problems in humans. Trappers should avoid splashing water in their face, and carefully wash their hands before eating or smoking. Anyone who develops severe abdominal cramps or persistent diarrhea while working with beavers should consult a physician. Tularemia has been reported in beavers from Canada and the northern US. Trappers should wear rubber gloves when skinning or eviscerating beaver carcasses.

Beavers become sexually mature in 1½ years and form life-long pair bonds. Beavers mate from November through March. They produce one litter per year, and 3 or 4 young are born about 105 days after mating. Young beavers typically are weaned in 2 weeks.

Beavers are skilled at building dams in streams. They build lodges in ponds and dens in stream banks, depending on what habitat is available (Figure 2). Beavers use the lodge or den for raising young, sleeping, protection from predators, and food storage.

Figure 2. Cross-section of a beaver lodge. Image by Prevention and Control of Wildlife Damage (PCWD).

Beavers are very territorial. A colony generally consists of 4 to 8 related individuals that resist outsiders to the colony. Young beavers commonly are displaced from the colony shortly after they become sexually mature at about 2 years of age. They often move to another pond to begin a new colony, although some become solitary and inhabit abandoned ponds.

Dam-building and tree-cutting tend to increase as beavers prepare for freezing winter temperatures. In northern areas, beavers stockpile or cache tree limbs, grass, cattails, and cornstalks below the surface of the water to ensure access to food below the ice. A fresh food cache is a sign of an active lodge.

Beavers may be abundant wherever aquatic habitats and trees are available.

The size and species of trees cut by beavers can vary from softwoods that are 1-inch diameter-at-breast-height (DBH), to hardwoods that are 6-foot DBH. Some beavers girdle pines and sweetgums for the sap that seeps from the wound. Poplar and aspen are preferred food trees. Beavers use many species of trees and shrubs to build dams.

Beavers use their tails to warn others of danger by abruptly slapping the water surface. Beavers have several vocalizations including churrs, mumbles, whines, snorts, and hisses.

Beavers damage gardens and landscapes through flooding and removal of plants. Valuable ornamental trees may be at risk near ponds or streams inhabited by beavers.

Beaver ponds can provide short-term benefits to warm-water fish species, but long-term negative impacts to streams are a concern. High quality trout streams are threatened by beavers due to increased sedimentation, water temperature, and acidity, as well as decreased dissolved oxygen.

Beavers may cut cornstalks for food, or use as building materials for dams or lodges. They generally are not a threat to livestock or pets.

Floods and falling trees pose severe risks to structures. Low-grade streams (less than 3% slope) with culverts or constricted areas are at highest risk for dams and resulting flooding. Beaver ponds created by dams may cause flooding of highways or railroads. Softened railroad beds may result in train derailments. Earthen dams may be destroyed by beavers burrowing in banks. Residential developments have been threatened by flooding, and thousands of acres of cropland and commercial forests have been flooded by beavers. Plugged ditches, drain pipes, and culverts must be cleared and sometimes replaced.

Beavers modify their habitat extensively, so disturbance by humans has little impact on them. Destruction of dams, and daily removal of materials used to construct dams, may cause beavers to move to another site. Such activities are labor-intensive and expensive. Some states may require permits to remove beaver dams.

Eliminate food, trees, and woody vegetation that are adjacent to roadways when possible. It is usually only feasible to do such drastic landscape changes for large highway projects.

Flow pipes can provide sufficient relief from flooding in some circumstances. Flow pipes are popular because beavers do not have to be killed. Installation of flow pipes, however, may result in the beavers simply moving up or down stream. Install flow pipes only when:

Consult the Internet Center for Wildlife Damage Management (ICWDM) for literature on construction of flow pipes.

It is often cost-prohibitive to exclude beavers from ponds, lakes, or impoundments. Protect valuable trees near waterways by encircling them with hardware cloth, woven wire, or other metal (Figure 3). 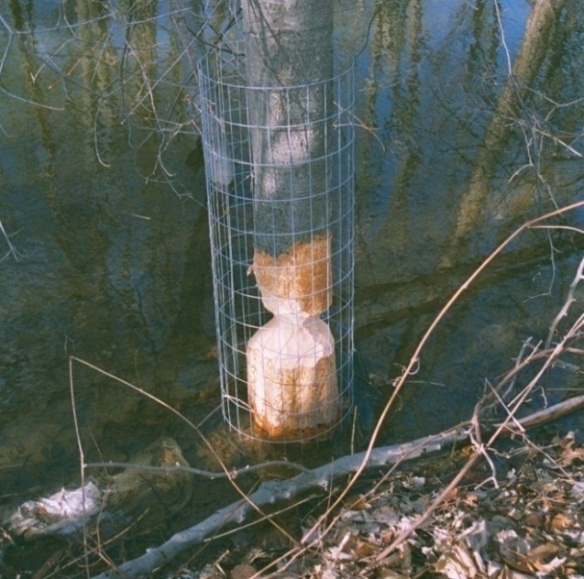 Figure 3. This fence would have worked if it was installed before beavers damaged the tree. Photo by Stephen M. Vantassel.

Construction of concrete spillways or other permanent structures may reduce the impact of beavers. A variety of techniques are available to protect culverts from obstruction by beaver dams, including barrier fences. Consult the resources at ICWDM.org for details on constructing and maintaining these devices.

None are effective for the control of beavers.

None are registered for management of beavers. Some trees may be protected by applying a mixture of 8 ounces of fine sand (30 mil, 70 mil, or mason sand) to 1 quart of latex paint. Protect the tree bark from the ground to a height of 4 feet. Stir the mixture frequently to keep the sand in solution. The color of the paint is a personal preference. Avoid painting young trees less than 6 feet tall. The sand-paint technique works best when beavers have alternative food sources available

None are registered for the control of beavers.

Hire a professional if shooting is the best management solution. In many suburban areas, firearms may not be discharged within 500 feet of neighboring dwellings without a permit.

The use of traps often is the most effective, practical, and environmentally-safe method for control. Several methods and types of traps are effective for beavers, depending on the situation. The effectiveness of any trap type depends on the knowledge of the trapper and the ability to read beaver sign, recognize food preferences, and use the proper trap and trap placement. An experienced trapper with a dozen traps generally can remove all the beavers associated with a single dam in a week. More effort will be required in large watersheds with several colonies. Traps should be checked daily.

Use a walking staff when wading in ponds to locate deep holes, runs, or trails. This will prevent stepping into water over waders or hip boots. It is not uncommon to find runs and entrances to lodges or dens 2 to 3 feet below the rest of the impoundment bottom in older ponds and bottomland swamps where beavers are common.

Relocation of beavers only is feasible for rescues.

Translocation should only be used when recommended by your state wildlife agency staff.

Carbon-dioxide chambers are effective for euthanizing beavers. A single bullet (.22 caliber or higher) to the brain is effective as well, but must be done carefully, as low-powered bullets may ricochet off the skull. Be careful if shooting in or near water.