House sparrows (Passer domesticus), European starlings (Sturnus vulgaris), and pigeons (Columa livia) are non-native species that cause a variety of problems in both urban and rural areas.  Birds may contaminate areas with their messy nests and droppings. Others consume and damage fruits and grains. Some kill or compete with native birds for nesting sites.

The Migratory Bird Treaty Act does not protect these species because they are not native to the US. However, some states and communities may restrict management. Before initiating control activities, accurately identify the species, as they can be easily confused with protected birds. Refrain from trying novel methods that may cause suffering and impacts to non-target species.

Unprotected birds include the house sparrow, European starling, and pigeon, also known as the rock dove.

House sparrows are the smallest of the unprotected birds at about 6½ inches long and weighing less than an ounce (Figure 1). Both genders are mostly brown with black streaks above and grayish below. Males have a black throat-bib flanked by white spots. Immature male house sparrows look like females. Do not confuse house sparrows with native sparrows (i.e., chipping sparrow, grasshopper sparrow, song sparrow) that are beneficial and protected by federal and state regulations.

European starlings are robin-sized, short-tailed black birds about 8½ inches long, and weigh about 3 ounces. Plumage color changes with gender and season (Figure 2). In summer, adults are glossy black with light speckles. In winter, birds have larger speckles, making them look browner from a distance. The dark pointy beak becomes bright yellow in spring. Both males and females have pinkish-red color on their legs. Other native “blackbirds” (e.g., red-winged blackbird and common grackle) and are protected by federal and state regulations. 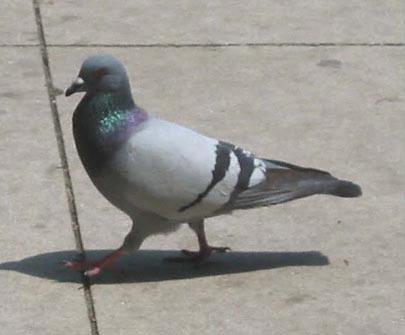 Pigeons are the largest of the 3 species, at about 12 inches long, and weigh 12 to 17 ounces. They typically are blue-gray with 2 black bands on the wings, and a black band on the tail that contrasts with its white rump (Figure 3). Color ranges from all white to mottled brown to sooty black. They are larger than the tawny-brown mourning doves that are native to the US and protected by federal and state regulations.

All 3 species of unprotected birds are found throughout the northeast, especially where there are people and human-altered environments.

These birds can carry and transmit diseases that are infectious to humans.  Diseases of particular concern include aspergillosis, histoplasmosis, psittacosis, and salmonellosis. In addition, all 3 species may pose significant hazards with bird-aircraft strikes at airports.

Female house sparrows lay 3 to 9 eggs in a single clutch, and may nest twice a year beginning in early April. Female starlings lay 4 to 6 eggs per clutch and can also nest twice a year. Pigeons mate year-round, but most of their 5 to 6 broods produced annually are raised during the spring and summer, when temperatures are above freezing. Females usually lay 2 eggs per clutch.

Nests of house sparrows are messy piles of grasses, string, paper, and twigs that fill a void or crevice where the nest is placed (Figure 4).

Nests of European starlings are less conspicuous and usually associated with a cavity. Sometimes cavities inhabited by starlings can be identified by the fan-shaped spray of feces on the wall below the opening. While preferring to construct nests in cavities, starlings may construct very large nests as they try to “fill” a void (Figure 5).

Pigeon nests usually are found on sheltered ledges and consist of sticks and hardened feces (Figure 6).

All 3 species use habitats in both urban and rural areas.

All unprotected birds eat grains, but each has its own dietary preferences. Sparrows and starlings also eat fruit, seeds, and suet. Both of these species increase consumption of insects during the nesting season. Pigeons require access to water (approximately 1 ounce per day), and grit to help them grind their food for digestion. Starlings and house sparrows also use grit but do not require it as often when feeding on insects.

Calls of sparrows are easily identified by a loud and repetitive “chirp.” Calls of starlings are quite diverse as they can mimic the sounds of other birds. Calls of pigeons consist of a soft and throaty cooing.

Damage to Crops, and Livestock

Starlings damage cultivated fruits such as grapes, peaches, blueberries, strawberries, raspberries, apples, and cherries. They also damage ripening corn. All 3 species of birds consume grain intended for livestock, and may contaminate feed with their feces.

Bird droppings are easily noticeable by telltale white stains. Droppings are acidic and can deface and accelerate deterioration of buildings. Accumulated droppings can plug gutters and cause water damage. The weight of droppings can collapse ceilings. Nests and feathers may obstruct exhaust vents and may cause fires.

Remove food and water sources to reduce the attractiveness of a property to birds. Secure trash in covered containers to prevent birds from accessing food waste. Remove spilled seed from grain storage facilities. Encourage officials to enact local ordinances to ban feeding birds in public areas. Reduce the availability of free water by repairing leaky faucets, clearing drains, and grading surfaces to remove water. Ensure that water from air conditioner condensers does not pool on roofs or the ground. Angle gutters to permit proper drainage.

Birds are attracted to trees with dense branches and leaf cover in the winter. Regular pruning of up to ⅓ of the branches can discourage birds from using trees as roost sites (Figure 8). Secure the services of a certified arborist for pruning landscape trees. Contact an electric company if trees are near power lines.

Nets with ½-inch mesh (Figure 9) will prevent birds from gaining access to a location. The use of nets is labor intensive, but often is the best way to prevent birds from accessing rafters and building frontage with many ledges. Zippers allow nets to be used in areas where access is needed, such as doorways and lights.

Ledge products such as spikes (Figure 10), wires, coils, and 45°-angle inserts prevent birds from roosting on flat surfaces. However, sometimes sparrows will stuff spike devices with nesting material and continue to use ledges.

Electric-shock products (Figure 11) may be powered by solar chargers or electrical outlets. When birds land, their feet complete the connection and they receive a mild shock, causing them to flee.

Shell crackers and other pyrotechnics are among the most effective devices. However, the explosive nature of these projectiles limits their use in urban areas. Always consult local authorities before using pyrotechnics. Starter pistols that project pyrotechnics may be considered as firearms in some states.

Avoid ultrasonic devices, as no reliable evidence indicates that they are effective. A Long Range Acoustic Device (LRAD) projects a high-decibel sound up to 153 dB out to 200 to 300 yards. The farther animals are from the source of the sound, the lower the decibel level. The LRADs are useful for hazing birds out of trees, or off of surfaces.

Tactile repellents (e.g., sticky gels) can be used to prevent birds from perching on ledges and other horizontal surfaces. These repellents are quickly fouled by dust or dirt, and best used indoors. Methyl anthranilate is a chemical frightening agent for birds. Professionals may use this repellent and fogging applicators to deter birds from warehouses and other large buildings.

OvoControl® P is an oral fertility control agent that prevents pigeon eggs from hatching, thereby interrupting the reproductive cycle. OvoControl® P is an unrestricted pesticide and does not require licensing (except in New York State).

Starlicide™ Complete is an avicide developed for starling control. It is only available for certified applicators trained in bird control.

Populations of problem birds can be reduced immediately through shooting. Use .177-caliber or .22-caliber rifles, and shoot at night, when the birds are roosting. Several birds can be shot before the remaining birds become startled and leave. Shotguns with No. 7½ shot are useful when controlling large flocks of birds in flight. Check local ordinances and state discharge laws before shooting. Always follow shooting safety guidelines and regulations. Shooting is usually limited in urban areas.

Traps (Figure 13) provide an excellent means of control in situations where other methods are not feasible, or there is risk of harm to protected species. Traps range from single-capture devices, to multiple-catch traps capable of capturing dozens of birds. Place traps where birds can see them easily, such as rooftops and raised platforms. When trapping large flocks, improve success by leaving a few decoy birds inside multiple-catch traps to lure others. Provide food and water for decoy birds and protect them from the elements. Pre-bait areas and check traps daily.

Nest-style traps (Figure 14) can be effective for sparrows and starlings inside structures.

House sparrow and pigeon nests are conspicuous, and often can be removed to reduce reproduction. The nests, eggs, young, and adults of these species are not protected by federal or state laws. Birds may re-nest, so often repeated nest destruction is required for success.

In rescue situations (e.g., from chimneys or basements), birds can be released on-site, provided the entrance has been secured properly.

Carbon dioxide is the preferred method of euthanasia. Cervical dislocation, or chest compression, are other options for people with training or experience.