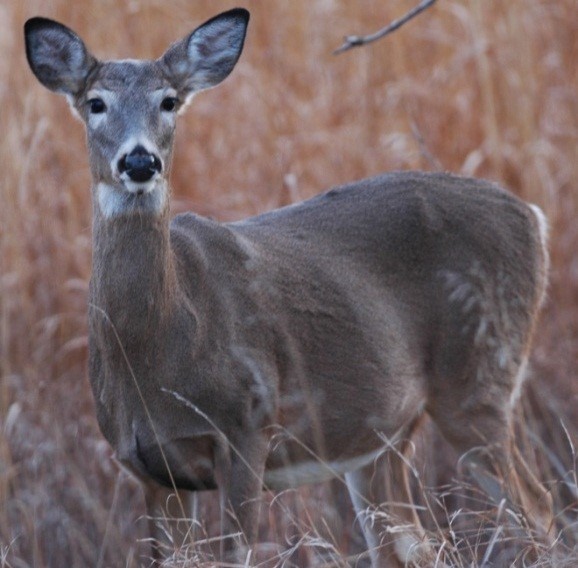 White-tailed deer are protected year-round in all states. Where severe or persistent damage occurs, states may issue depredation or nuisance permits to allow shooting of deer at times other than legal hunting seasons. Regulations vary on the necessary permits and on disposal of dead animals. The popularity of deer as game animals, and the need to curb poaching, have led to the development of severe penalties for illegal possession. As a rule, lethal control of deer cannot be initiated before consulting your state wildlife agency. Some states provide technical assistance or compensation for damage by deer.

White-tailed deer (Figure 1) are found throughout the northeastern US. The volume of literature on the ecology and management of deer exceeds that for any other species of wildlife. We recommend Biology and Management of White-tailed Deer by Hewitt (2011) as the best single reference.

At birth, young white-tailed deer (fawns) are rust-colored with white spots. The spotted coats are shed in 3 to 4 months and replaced by a grayish-brown winter coat. The summer coat of adult deer is reddish-brown. The area under the tail, the belly, chin, and the throat always are white. Antlers grow on males (bucks) from April to August. Development of antlers is nourished by a layer of soft, vascularized “velvet.” The dried velvet is rubbed off and the antlers polished during the fall breeding season (rut). Size of antlers depends on nutrition, age, and genetics. The antlers shed in mid- to late winter.

Size of adults varies with latitude. In northern states, a mature buck may weigh 150 to 250 pounds. Females typically weigh 30% less than bucks.

Deer-vehicle collisions are the biggest threat to human safety. In addition to the economic loss from damaged vehicles, 100 to 200 people in the US die each year, along with thousands who are injured by hitting or avoiding deer (Figure 2). To reduce the chances and impacts of a deer-vehicle collision, drive cautiously, follow the speed limit, wear a seatbelt, observe deer-crossing signs, be extra vigilant during the fall mating season and spring dispersal periods, and anticipate that more deer may be present. About 65% of the deer-vehicle collisions that occur annually happen during the rut (mating season) in October through December. Do not swerve to miss deer, as this frequently leads to serious injuries due to rollovers and collisions with other vehicles and objects. 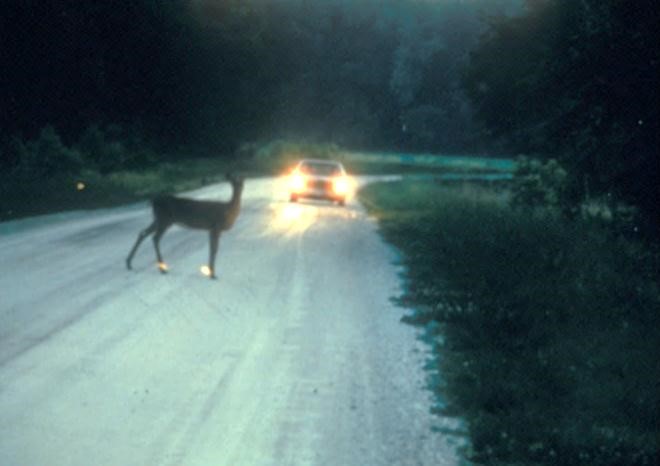 Deer are susceptible to several diseases, but only a few are of concern to humans. Deer are associated with the movement and development of ticks that carry Lyme disease, ehrlichiosis, and babesiosis. Deer can be reservoirs for bovine tuberculosis, which threatens the health of livestock and humans. On rare occasions, deer have attacked people.

White-tailed deer breed from October to January, depending on latitude. Peak activity for breeding is in November. Does are in heat for 24 hours every 28 days for 2 or 3consecutive cycles. One buck may inseminate several does, and no pair-bonding takes place. Most does breed during their second fall, although in good habitat, up to 30% of doe fawns (6 months old) will breed. Gestation is about 202 days. Fawns usually are born in late May or June. Most reproducing fawns give birth to a single fawn, but adult does typically bear twins. Reproductive potential depends on nutrition. Fawns weigh 7 to 8 pounds at birth and increase in weight for 5 to 6 years.

Bedding areas vary, depending on the time of year and location. Deer may bed in woodlands, grasslands, and agricultural fields. During windy winter days, deer seek out heavy cover. In urban areas, deer may bed along home foundations to take advantage of the warmth.

In northern areas, deer gather or “yard up” in dense cover for the winter. They may move up to 100 miles from a summer range to a winter yard. They have a home range of several hundred acres that varies with season, sex, and quality of habitat. Life expectancy primarily depends on pressure from hunting and winter weather. Deer can live for up to 20 years, although 10 years is above average in the wild.

Ideal habitat for deer is forest edges rather than dense, old-growth forest. They thrive in agricultural areas interspersed with woodlots and riparian habitat. Deer favor early successional habitats where brush and saplings are within reach (typically 6 feet tall or less).

Many populations of deer flourish in urban areas because of the diversity in plant foods, and lower, or no hunting pressure. In the northeast, deer densities may exceed 150 animals per square mile in suburban areas with patches of forest habitat or park lands. This could be 4 to 5 times the typical deer density in rural areas.

Deer browse on leaves, stems, and buds of woody plants all year long. Forbs are eaten in spring and summer, when available. Fruits and nuts, especially acorns, are important in fall. Grasses are relatively unimportant in the diet.

In urban areas, deer consume a variety of landscape ornamentals and garden plants. There are very few plants that deer will not consume if they are food-stressed in winter.

Agricultural crops such as corn, soybeans, grains, alfalfa, vegetables, nursery stock, and fruit trees are eaten readily. Daily consumption for adult males is greatest in spring and is about 4½ to 6½ pounds of food per day. Consumption drops by half during winter.

Deer may emit a warning snort when alarmed and bleat when in distress.

Deer may damage a wide variety of ornamentals. Ornamental trees may be permanently disfigured by browsing or rubbing. In addition to the immediate loss, feeding of deer can affect the future yields for fruit trees.

High densities of deer may severely impact native plant communities, and impair regeneration of several tree species and wildflowers. Deer are changing future forest composition in the eastern US.

Deer may cause damage to a wide variety of row and forage crops, vegetables, fruit trees, nursery stock, and stacked hay.

The feeding habits of deer may compete with livestock. Deer can be reservoirs for bovine tuberculosis, which threatens the health of livestock and the economic viability of dairy industries. Deer also are involved in the maintenance of the strains of virus that cause epizootic hemorrhagic disease and bluetongue in cattle. On occasion, deer attack dogs.

In general, deer do not damage structures. They occasionally run through and break fences, and plate-glass windows. Young bucks are most often involved with structural damage.

Some state-funded programs offer subsidies for materials for damage control, or direct compensation for losses resulting from damage by deer. These subsidy programs tend to be more common in western states than in the northeast. Such programs can be very costly but probably are necessary where large deer herds are maintained in agricultural landscapes. Individual states vary greatly in their degree of financial and technical assistance for deer damage management. Consult your state wildlife agency for information.

Harvest crops as early as possible to reduce damage by deer. Use deer-resistant ornamental plants in home landscapes. In a few cases, lure crops have diverted the interest of deer away from valued resources.

Protect individual trees with woven-wire or plastic cylinders at least 6 feet high. High-tensile, woven-wire fences provide premium protection for orchards, nurseries, truck farms, backyards, and other valuable resources. High-tensile, multi-strand electric fences are a lower-cost option for row crops, forages, livestock, and other farm facilities. However, deer may learn how to penetrate electric fences, and the fences are less effective on large fields (10 or more acres). Single-strand, baited polytape electric fences are the lowest cost option for protecting gardens, small farm fields (<5 acres), and other areas from deer damage during the growing season.

In general, frightening devices are only minimally effective in protecting valued resources from white-tailed deer.  Deer acclimate quickly to noises and new features in the environment, especially if they are motivated by hunger.  Thus, gas exploders, strobe lights, sirens, and scarecrows do not provide reliable protection.  The most effective frightening devices have been pyrotechnics, guard dogs, and deer-activated bioacoustics devices.

Several repellents are registered for use to prevent deer damage to plants, including putrescent whole egg solids, ammonium soaps, thiram, capsaicin, garlic, and blood meal. Several home remedies, such as human hair and soap are reported to be effective, but research does not support these claims. In general, the effectiveness of repellents is highly variable and dependent on alternative resources, deer densities, habituation, and motivation of individual deer. Repellents must be reapplied every 4 to 5 weeks if deer feeding pressure is high, and those applied to plants must also be reapplied to new growth. In the northeast, cold temperatures and snow limit applications during the winter months when deer damage to woody ornamentals and young trees is greatest.

Reproduction in white-tailed deer can be altered by immunocontraceptive agents (injectable porcine zona pelucida and gonadotropin releasing hormone vaccines are EPA-registered), and surgical sterilization. However, application of these procedures is limited due to expense, practicality, and regulatory issues. State permits are required to treat deer, and such programs can only be accomplished by trained professionals. Given high urban deer densities and costs, programs are often scale-limited. It may only be practical to treat areas a few square miles in size.

Deer fertility control does little to reduce densities of overabundant deer in the short term as urban deer may live 10 or more years. Similar to shooting programs, success depends on having access to a high percentage of deer (90% or more), the vulnerability of deer, professional skills, cost, and public acceptance. Contact your state wildlife agency for information.

No toxicants are registered for the control of white-tailed deer.

Unlike moles, rats, and other unprotected wildlife, deer cannot be casually eliminated when in conflict with humans. Shooting through regulated sport and managed hunting during fall and winter can help maintain or reduce deer densities. Depredation or nuisance deer permits are available from some state wildlife agencies during non-hunting seasons to reduce local densities and remove offending animals in agricultural and urban areas.

Sharpshooting is a specialized form of population reduction, typically conducted by trained teams in urban and suburban areas where deer are overabundant, under highly controlled conditions. The effectiveness of shooting as a control method is dependent on access to deer, vulnerability of deer, skill of shooters, cost, and public acceptance. Depredation permits may allow shooting of deer at night, and the use of bait to attract animals to specific safe shooting sites.

Several techniques are available for capturing deer (e.g., cage traps, drop nets, cannon nets, net guns, and dart guns).  All methods require authorization by state wildlife agencies.  Each method requires high levels of expertise, and they are expensive to apply because of high labor costs. Deer trapping is usually done by professionals, and may be used in conjunction with an urban sterilization program. Trapping and translocation of deer is usually not feasible because of poor survivorship.

Live capture and relocation of deer is seldom practical unless there is a rescue situation, or public relations mandate live removal.

Translocation of deer is very expensive and can lead to stress and death of the deer. Most states currently do not allow translocation of deer. Also, deer are abundant in many eastern states, and there are no places to release deer where conflicts can be avoided.

The most convenient method of euthanasia is shooting. However, captive-bolt devices may be needed for captured deer in suburban areas because of restrictions on firearms discharge. For more information, see the National Wildlife Control Training Program.